RBRvr v1.6 – Fix for crash with some controllers

Here is a quick update to RBRvr that should fix crashing that occurs when two VR controllers are present with different models (Like most Oculus headsets). Also the left/right controller assignment for Vivedrive should be fixed.

Download from here. See the readme.txt for instructions and some troubleshooting hints as usual. 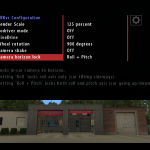 Here is another update to RBRvr which should fix the latency issues with rendering introduced in v1.4. It took a long time to find a way to get it working properly, but now it should be a lot more pleasant to look at.

In addition it comes with options to disable the default camera shake in the in-car view and and to lock the camera to the horizon in either roll axis only or roll + pitch.

I did not have time to test it thoroughly so its possible there are some bugs as the RBR camera override is now done in a totally different manner.

Get the updated v1.6 from here.

RBRvr v1.4 – Fix for crash with the Rift

Here is an update to RBRvr that fixes the random crashing issue with the Oculus Rift, the steering wheel rotation setting not working properly and the virtual VR goggles sometimes appearing when pausing/unpausing the game.

Plugin compatibility has not improved with this version since fixing the Rift issue took quite a lot of time.

Here’s an update to RBRift, now called RBRvr, that brings support for OpenVR. It should work at least with the HTC Vive, hopefully also with Oculus Rift although as I only have the Vive I haven’t been able to test it on the Rift.

This version also brings other improvements, including ability to drive with the Vive controllers. See the video below.

Edit: Get the updated version from here.

The default configuration has a render scale of 200%, if you are also using the SteamVR setting to increase the pixel density further you may see some performance problems. The render scale can be changed from the in-game menu or by editing the rbrvr.cfg file.

If you like it you can donate from the button on the right :)

Here is another update to RBRift for Richard Burns Rally. Version 1.2 changelog:

Windshield hider is a new feature as well, it allows hiding parts of the car windshield which is just a mapped flat texture on the cars and does not appear right with stereo rendering. Also on many mod cars the windshield is too dark. The feature can be toggled with numpad asterisk key.

Clip plane tweaks should fix issues on some tracks where distant terrain got clipped away and improve in-car clipping. In-car views in replays now appear in “VR mode”. The 3D monitor effect from old versions is unavailable unfortunately, its no longer practical due to the different stereo rendering implementation.

Download from here. See the readme for install instructions as usual and some troubleshooting hints.

Here’s an update v1.1 to RBRift for Richard Burns Rally with fixes to some compatibility issues and few improvements. Changelog:

The latency fix should make it useable with vsync enabled, though by default its still disabled in the config. The compatibility fixes hopefully fix the random startup problems and make BTB tracks work that use the rbr_rx plugin.

The new codriver mode allows you to drive from the drivers seat using your standard monitor while a codriver rides with you on the codriver seat wearing the rift. So with it you can take a friend on a virtual rally car ride :) See the readme for instructions how to use it.

See the readme for install instructions as usual and some troubleshooting hints.

Protip: for better immersion you can change the steering wheel rotation degrees the following way:

I recently got a hold of the Oculus Rift DK2, and decided to try to make Richard Burns Rally work with it using a Direct3D “proxy” DLL. I had actually done it before already when I had access to the DK1 for a few days, but that was very rudimentary and did not really work too well. After some rewriting I got it working quite nicely so its here for anyone to try. It supports:

It does not work with direct-to-rift mode for some reason so even the DK2 needs to be in extended mode. Also by default vsync is disabled since I experience some latency issue with vsync on – you can change the behaviour from the config file.

You need RBR version 1.02 with SSE executable. See the readme file for instructions how to use it and also some troubleshooting hints.

Posted by kegetys on 29.10.2004
Posted in: Richard Burns Rally mods. Leave a Comment

RBRdll is a small program for RBR that adds a “glare” postprocessing effect, enables minihud during replays, allows time acceleration/deceleration during replays, adds an FPS meter and allows to force the game to run in a windowed mode.

RBRdll 1.3 requries version 1.02 of Richard Burns Rally to work. Because of the way RBRdll works, its likely that there are compatibility problems with some system configurations.

Read the readme file in the archive for install and usage instructions.

Make sure you have the 1.01 patch for RBR installed (shows v0.75 in the profile screen). The features most likely wont work with any other version executable, different localized versions(other than english) propably don’t work either.

Make sure you dont have antialiasing enabled from your video card settings, as the postprocessing effects do not work properly with it. Also try adjusting the blur size from the RBRdll config.

How do I capture the debug output that can be enabled from the config?

The debug output uses Windows standard OutputDebugString function, it can be captured with DebugView for example.

Try looking at the debug output for hints on what might be wrong. Try different settings for RBRdll and in the RBR graphics options to find a possible cause.

I made much better notes to stage X, how can I give the notes to other people to use?

The notes are saved in maps/track_XX-X.dls files. You can see the exact filename when saving/reloading the notes in the pacenote editor. You can distribute that file to distribute your pacenotes for that stage.

RBRdll should make backups of the original pacenote files to RBRdll/backups directory. Copy the files from there to your RBR maps directory.

Posted by kegetys on 25.09.2004
Posted in: Richard Burns Rally mods. Leave a Comment

Numnotes replaces the default english pacenotes from RBR with numeric versions. It has two versions, ‘increasing’ and ‘decreasing’.

The new pacenote sounds are a bit shorter than the default ones, so rapid notes should get called a bit faster. For a sample of what is sounds like, check out this video (5MB xvid avi).

Do a backup of your original audio.dat before installing!

I don’t like it, how do I get the original pacenotes back?
Replace the audio.dat file with the backup you made before installing Numnotes.

How can I switch between ‘increasing’ and ‘decreasing’ versions?
Just run the installer batch file again for the version you want to use.

DATtool can be used to extract and repack the DAT files (like audio.dat) from Richard Burns Rally.

DATtool is a command-line application, so it can be easily used to do automated installations. It also supports Windows Explorer “drag and drop” use.

Note that DATtool overwrites all files without asking, so make sure you know what you are doing and always make backups of the original game files when doing modifications.

Posted by kegetys on 18.09.2004
Posted in: Richard Burns Rally mods. Leave a Comment

RBRtimes exports all stage records from Richard Burns Rally to a HTML file, that looks like this.

It can also export the results to a plaintext file, and by uploading the HTML records file to a website you can compare your stage records with other people.

To use it, simply put the RBRtimes.exe into your Richard Burns Rally directory and run it. It should create a file named “Records.html” which contains all the stage records. The exe also outputs the records in plaintext to stdout, so by running it from the command line or by piping the output to a file, with “RBRtimes.exe >records.txt” for example, you can get your results in a format that you can easily “copy-paste” anywhere.

Note that if you haven’t driven any stage records yet, all records will be held by Richard Burns.

The results can be compared using this website. Just insert the URLS of any Records.html’s you want to compare into the textbox and click compare.

When I run the EXE, a console window just flashes and nothing else happens. Whats wrong?
RBRtimes is a console application, and creating the Records.html is quite fast so its normal for the program to just quickly “flash” when ran. Check your RBR directory, RBRtimes should have created a Records.html file which contains the stage records.

I ran the EXE, but a Records.html was not created.
Try running the program from the command prompt to see if it outputs any errors.

It says ‘SavedGames/pfresult.rst’ not found, whats wrong?
Make sure you run the RBRtimes.exe from the directory you have Richard Burns Rally installed in. If you are running it from the Windows Explorer, the exe should be placed in RBR directory. If running from the command line, ‘cd’ to the RBR directory first before running the EXE.