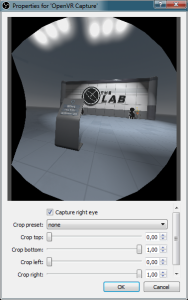 I made an input plugin for Open Broadcaster Software that allows capturing video directly from OpenVR/SteamVR mirror surface.

It allows capturing either the left or right eye, in full resolution as it is rendered by the game with some cropping presets (for HTC Vive) to use on those games which mask out the invisible parts of the image such as The Lab does in the screenshot to the right.

A known issue is a memory leak in the OpenVR SDK that causes OBS to slowly leak memory if the plugin is active but SteamVR is not running. The leak is quite mild at some tens of kilobytes per minute so its not a too serious issue. I have reported it almost an year ago here but Valve still has not fixed it.